Purpose: Using film or player tracking data (Sport Vu), a quantitative analysis representative of the entire possession will occur where each moment in the possession is summarized on the basis of the expected value of the possession at each moment. For each moment of a possession a value is assigned to each of the individual tactical moves a player can make, allowing analysts to evaluate each decision that a player makes. Under this model, dishing the ball to an open shooter at the key or near the basket is worth more expected points than to a covered player in the corner. EPV is an extremely new avenue of basketball analysis focusing on decision-making, opportunity creation and prevention.

Formula: EPV is a conditional expectation – the expected number of points the offense will score, given the spatial configuration of the players and ball at time during the possession. The expected value of different plays in a possession in some sense is subjective. The current EPV of a possession is the weighted average of the outcomes of all future paths that the possession could take.

Applications: In addition to providing a quantitative lens through which we can analyze entire possessions, metrics derived from EPV can provide precise answers to a number of fundamental basketball questions such as whether performs above average with regards to the decisions they make given their options. no other stat could answer this with the same level of objectivity or accuracy. AN example of a statistic based of this framework is the EPVA statistic.

EPVA (A = added over replacement)

Overall Benefit: the EPV framework is a model for basketball analytics that is congruent with the flowing nature of the sport and overcomes many shortcomings of the conventional boxscore approaches to analyzing the game, through recognizing the importance each individual component of a possession, rather than the end-state

John Hollinger – Creator of the PER statistic, one of the most commonly used measures of value 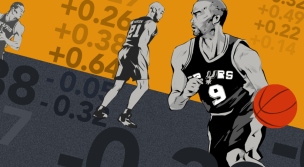 Owner of Dallas Mavericks. He has been an enthusiast of using analytics to drive roster management decisions.